My teacher has taught me many environmental issues in school, but this term’s class on environmental problems was one of the classes in which I have learned the most about it.

During the holidays, I made a poster focusing on Transition Town and Zero Garbage Day. I was impressed by the transition town activity as I didn’t know about it before being taught in this term. When I heard about the environmental problems, I imagined reducing garbage and carbon dioxide; however, I found out that in Transition Town, in order to stop depending on oil, preventing the progress of environmental destruction and shifting to a sustainable society, citizens voluntarily think about local life and act with consciousness every day.

Also, after coming to school, I was able to listen to everyone’s presentations. This led to a deeper understanding of various environmental problems. In my friend’s presentation, I was surprised that vegans are also involved in cosmetics. She presented LUSH as an example. This was a shop I had visited, so when I learned that the shop was working on solving environmental problems, it made me more determined to pay attention to more things when shopping and the next time I go to LUSH.

We constantly produce garbage, so I think it’s important to keep in mind when throwing away trash and buying new things. Therefore, I would like to work not only on 3Rs but also on 6Rs, which aims to reduce plastic waste. I think it is especially important to reduce plastic waste to protect the future of the sea. For example, avoid getting plastic bags when shopping, or use your own bottles instead of plastic bottles. Now that coronavirus is prevalent, I think that using a reusable bag or water bottle will prevent infection because there is less contact.

In conclusion, I would like to act to protect the environment, even if it is trivial, in order to make the world a comfortable place to live in the future.
(333 words) 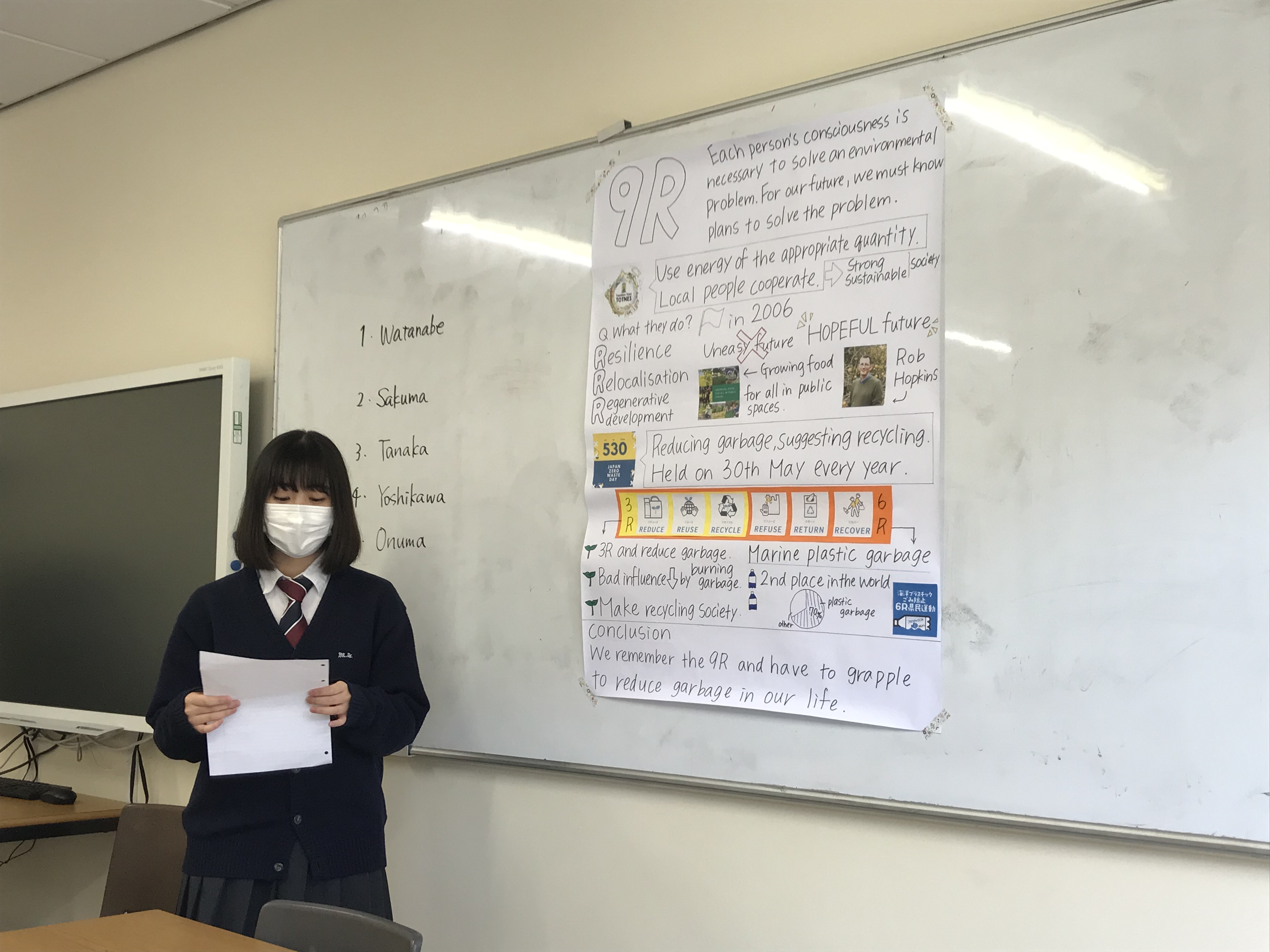 Acceptance is the first step to improve myself

I felt a lot of cultural differences from Japan since I have lived in the UK. It contains good things and bad things. Among them, what I thought to be nice is that British is rich in volunteer spirit.

What I especially like is that children can actively do volunteer. This means that people set their own goals and raise money as rewards for achieving goals. In fact, I participated in the fund-raising by running and achieving the tasks. I have taken part in the red feather campaign at school in Japan, but I could not make any money yet, so I did not feel like I had donated. The volunteer activities in Japan have a strong meaning to help people in vulnerable positions and there is a recognition that taking part in the volunteer activities is a great action. In contrast, I think that they can do something useful for people naturally and freely in the UK.

Not only volunteer activities, a spirit of helping each other is not special for British people.

‘Please have a seat’. ‘Can I help you with your luggage?’ You can hear these words frequently. In fact, when I had an injury in my leg, I was given up my seats and I have had a kind person carry my heavy suitcase. Also, I could not talk to someone to give up my seats due to embarrassment when I was in Japan. However, I became able to talk to give up my seats. Circumstance in Britain changed me.

Japanese still have a sense that the volunteer activities are unfamiliar. Japanese people have a wonderful heart ‘omotenashi’ that is Japanese hospitality. However, I think that a modest attitude of keeping down self-assertiveness is a virtue, so volunteer activities are embarrassing for Japanese people. In Japan, there tends to be a lot of peer pressure. Moreover, it is said that it is easy to feel resistance to something different from ourselves. In other words, if everyone does volunteer, I am considering that the spirit of volunteering is easily take root.

Through the spirit of volunteering in the UK, I learned the importance of trying to understand other people even when I encountered something different thoughts and behaviours. This will allow us to notice and understand the good points of other people. Though there are cultural differences such as living condition and religion, there is certainly something that we can seem wonderful. How could I not act despite that we know it is nice action? I started to think that it is not embarrassing to act, but it is embarrassing not to act. I would like not to be bound by any values and stereotype, make every effort to understand others and have the courage to act what I believe is right in my future. I think that acceptance is the first step to improve myself. [552 words]

There are nearly 7.5 billion people in the world. We are all different and we are all special. Incredible diversity of culture, language, religion, and appearance make the world more fascinating place. Despite this, the lack of knowledge about differences among us could amplify anxiety and fear that make it difficult to accept others from different backgrounds. My intercultural experiences in the UK taught me the importance of embracing our differences.

Last year, I applied my school’s short exchange programme and studied at local British school. I was instantly mesmerized by its ethnic diversity. During the first week, however, I started to feel isolated and unintentionally put up barriers around me, instead of opening myself up to others. I remember the feeling of anxiety swept over me when I vividly noticed differences between me and other students. But, one girl changed my view of the world dramatically. When I first saw her, she was talking joyfully with her friends. One thing, however, stood out to me was a black headscarf covering her hair; she was a Muslim. Suddenly, the shocking image of Islam terrorism came into my mind. When my friend introduced me to her, I felt nervous. Then she loed at me pleasantly and said,

‘’You have wonderful black hair’’. Seeing her innocent smile, I felt ashamed that I had momentarily associated her with the negative media portrayal of Muslims that was deeply instilled in me.

As time went by, she became one of my precious friends. Her unlimited generousness has been a role model to me. She invited me to her house for dinner twice. On that day, as I entered the room, four adults were speaking quickly in Arabic and her cousins were playing card games. Women all wore flowing dark-coloured robes. The room had a different atmosphere compared with my host family’s house. At that time, I was not ready for some culture shocks. While watching a film together, she suddenly stood up and left the room. Then I heard unfamiliar words from the next room. It took me a few minutes to discern it was prayer. She explained to me later the five daily prayer times are the most important for Muslims. Sitting alone on a sofa I recognised again that I led a completely distinct life from her. Later, her mother cooked curry for dinner. Until that day, I did not know Muslims only eat haral food and do not eat pork. When I started to eat curry with a knife and folk, her little brother gave me a look of confusion which I can never forget. Then I realised that all of them were eating with their fingers, picking up curry and rice proficiently. What I noticed next was they were using the right hand. Little did I know that left hand is considered unclean in Islam, so they shake hands with the right hand and avoid eating with the left hand. Although it sounded onerous for me, they respect their custom. I was the only person who was eating with utensils, using the left hand. As many differences came apparent, I strongly felt as if I had been transported to another world. I thought eating curry with my right hand would be regarded as an impolite manner in Japan. After a moment of hesitation, I made up my mind to eat with my fingers. I was heedful not to mess things up, but her brother told me special knacks and I was becoming used to it. Everyone smiled at me happily. I finally felt I could understand and embrace their culture.

Realising differences widened my global mind-set. After this experience, I felt intercultural communication cannot be achieved by simply improving language skills; rather, it is more important to cherish different cultures. Thus, I started to learn them. With deeper understandings, I could have an image more clearly about other cultures, and this has helped me when I talk with diverse students from China to Brazil. From unparalleled opportunities at her house I learned the importance of taking time to understand people’s cultural backgrounds and respecting our differences. I bear these two things in mind all the time. [695 words] 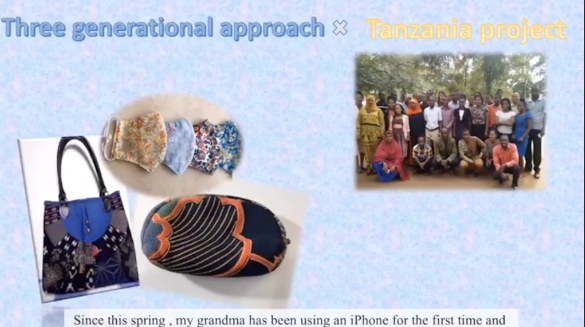 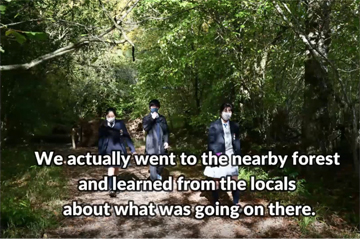 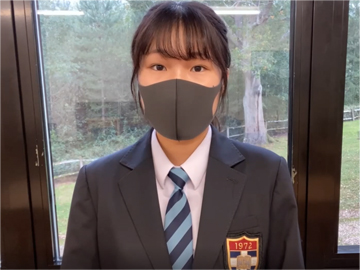 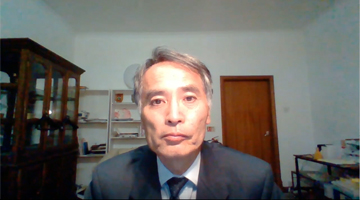